The Charging Stone: Why you need a stylish wireless charger

Wireless charging has never been so widespread or popular. All the latest smartphones by Apple, Samsung, and Google — to name just a few! — can recharge without the need for cables. However, since wireless charging pads aren’t included in the box with new devices, it’s up to you to choose one that works with the specs.

Read on to discover why the Einova Charging Stone is the essential tech accessory you didn’t know you needed: a stylish wireless charger that powers up your phone fast while adding refinement to your space.

How does wireless charging work?

How does wireless charging work? And how does a stone charge a smartphone? It’s all thanks to a little natural phenomenon that you might remember from science class: electromagnetic induction.

What is fast charge?

Modern wireless chargers are often equipped with fast charge technology, also known as fast wireless charging. What’s this, you may be asking?

Simply put, recharging speed is directly proportional to the output wattage, and thus to the total power. The more powerful a charger is, the faster it charges; a 15W wireless charger will deliver power much more quickly than a 5W one. (It’s important to remember that the “fast” in fast wireless charging is always relative. Charging your phone via cable will always be the absolute speediest method.)

Additionally, some smartphones are subject to limitations imposed by the manufacturer’s proprietary fast wireless charging protocols. These fast charging standards allow the phone to recharge at the maximum speed indicated in its tech specs — but exclusively with the manufacturer’s own brand of wireless chargers. A mobile device may technically support fast charging, but it can’t always perform at the maximum speeds indicated on the box.

Why you need a stylish wireless charger

You deserve more than another piece of plastic! Designed in Italy, every Einova Charging Stone is crafted from solid genuine marble or other fine stone, a unique piece of art that just happens to be a practical and easy-to-use tech accessory.

Bring a small, beautiful piece of the natural world to your desktop with one of these color and stone variations:

The marble or stone wasn’t chosen just for its aesthetic excellence. These materials also act as a natural heat sink, keeping your device cooler during the charging process. The braided cable is durable and strong, integrated into the charger, and in a complementary color to your stone variety.

Yes, wireless charging is completely safe. It’s impossible for electromagnetic waves to be released without direct contact between the charger and smartphone.

What’s more, all Einova wireless chargers are Qi certified by the Wireless Power Consortium. And that means you can recharge your Qi compatible devices with complete peace of mind. There’s no risk of damaging your device’s battery.

(Unsure if your phone is Qi compatible? Check out our Qi device compatibility list.)

To sum up, why is the Einova Charging Stone the ideal stylish wireless charger? You get practical fast charging technology and beauty par excellence Designed in Italy, an essential accessory that effortlessly levels up your home or office. 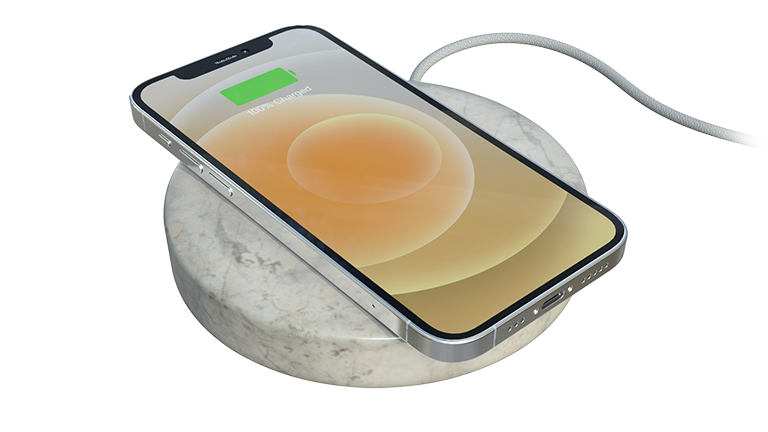